What are perovskites and their applications

The perovskite crystal family is a group of materials that have been attracting attention in recent years due to their exceptional properties and potential applications in nanotechnology. One of the most exciting areas of research is their use in the development of nanostructured solar cells. These materials have the potential to significantly improve the efficiency and cost-effectiveness of solar energy production, making them a highly promising area of research for scientists and engineers alike. With their unique physical and chemical characteristics, perovskites have the potential to revolutionize the way we harness and utilize solar energy.
Named after 19ty century Russian mineralogist Lev Perovski, perovskite materials have a crystal-lattice structure of inorganic molecules like that of ceramics, along with organic molecules that are interlaced throughout.
Perovskites are a family of crystals that show promising properties for applications in nanotechnology, especially nanostructured solar cells. ‘Perovskite’ is a term used to describe a group of materials that have a distinctive crystal structure of cuboid and diamond shapes. They have long been of interest for their superconducting, electronic and ferroelectric properties.
Since it was discovered that they are also remarkably efficient at absorbing photons of light and that this can be converted into an electric current, research interest in perovskite solar cells has skyrocketed.
Crystals are structures composed of atoms, molecules, or ions that are arranged in a repeating pattern that extends in all directions. They are commonly found in everyday items such as salt, diamonds, and snowflakes. However, when crystals are reduced to the nanoscale, they can exhibit unique properties that make them valuable in the creation of technological applications on a small scale. This is the world of nanocrystals, which have proven to be useful in developing technology at the nanoscale.
Quantum dots are synthetic nanocrystals that are made up of only a few thousand semiconducting material atoms. Researchers have explored the fundamental physics of perovskite quantum dots by studying the interaction between electrons and light in these materials. 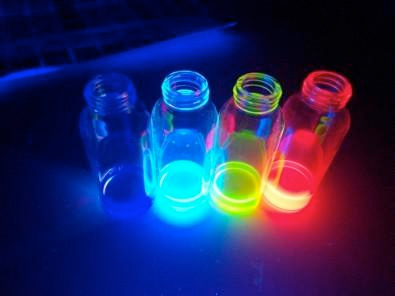 Nanomaterials of perovskite dispersed in hexane and irradiated by laser. Light emission by these materials is intense thanks to resistance to surface defects. (Image: Luiz Gustavo Bonato)
Results like these are very important since knowledge of the optical properties of perovskites and how its electrons behave opens up opportunities for the development of new technologies in semiconductor optics and electronics.
For instance, the incorporation of perovskite is highly likely to be the most distinctive feature of the next generation of television sets.

Despite the simplicity of the original perovskite crystal structure, this family of compounds shows an enormous variety of structural modifications and variants.
The mineral perovskite (‘true perovskite’) is composed of calcium, titanium and oxygen in the form CaTiO3. Meanwhile, a perovskite structure is anything that has the generic form ABX3, with varying composition, and the same crystallographic structure as perovskite (the mineral).
A, B, and X can represent a combination of different organic and inorganic ions. A is an organic cation; B is a big inorganic cation; and X3 is a smaller halogen anion (frequently oxide) that bonds to both cations.
Depending on which atoms/molecules are used in the structure, perovskites can have an impressive array of interesting properties, including superconductivity, giant magnetoresistance, spin-dependent transport (spintronics) and catalytic properties. Perovskites therefore represent an exciting playground for physicists, chemists and material scientists.
In nature, perovskites are primarily found as oxides, with the majority being silicates (such as bridgmanite minerals), but they also exist as fluorides, chlorides, hydroxides, arsenides, and intermetallic compounds. While the number of natural perovskite minerals is limited, synthetic perovskites span across the whole periodic table in terms of elemental composition, and they can exist in many complex formulas such as metallic perovskites, hybrid organic–inorganic perovskites, metal-free perovskites, and even noble gas-based perovskites.
The majority of efficient perovskites are semiconductor lead metal halides with tunable bandgaps.

Standard depiction of the aristotype cubic perovskite. Shown in display styles evidencing either all the atoms (left) or only the BX6 octahedral network and A atoms (right). (Source: doi:10.1021/acsenergylett.0c00039)

A perovskite solar cell is a type of solar cell, which includes a perovskite structured compound, most commonly a hybrid organic-inorganic lead or tin halide-based material, as the light-harvesting active layer.
Perovskite materials are usually cheap to produce and relatively simple to manufacture. They possess intrinsic properties like broad absorption spectrum, fast charge separation, long transport distance of electrons and holes, long carrier separation lifetime, and more, that make them very promising materials for solid-state solar cells.
A defining moment came in 2012, when Professors Henry Snaith at the University of Oxford and Michael Graetzel at the Federal Institute of Technology Lausanne, building on the work of Tsotomu Mayasaka from Tokyo, found that solar cells with perovskite as the active component could be made with greater than 10% power conversion efficiencies for turning the sun’s rays into electrical energy. A mere two years later, Snaith increased this to 17%. For silicon-based solar cells, it’s taken 20 years of research to achieve this level.
Since then, the sunlight-to-electrical-power conversion efficiency of perovskite solar cells has skyrocketed, with the laboratory record standing at 25.6% (as of April 2021). 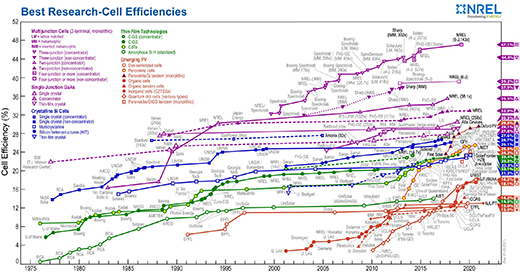 Efficiencies of solar cells. Devices included in this chart of the current state of the art have efficiencies that are confirmed by independent, recognized test labs—e.g., NREL, AIST, JRC-ESTI, and Fraunhofer-ISE—and are reported on a standardized basis. Click here for details.
Researchers are also combining perovskite solar cells with conventional silicon solar cells. Nanotextured designs can achieve a power conversion efficiency potential above 29%, which simulations suggest could be further improved with better fabrication techniques and additional texturing.

With this rapid surge in efficiency, perovskite solar cells and perovskite tandem solar cells may soon become cheap, highly efficient alternatives to conventional silicon solar cells.
What’s holding their commercial success back is the fact that all existing perovskite processing methods have a significant deteriorating effect on the material’s optical qualities. Also, most perovskite solar cells are based on toxic lead elements, so making them mor environmentally benign has to be a key goal.
Mark Ziffer from the Ginger Lab at the University of Washington demonstrates how to construct a perovskite solar cell.

Researchers have demonstrated that perovskite cells excel not just at absorbing light but also at emitting it.
More recently, researchers have realized a broadly and continuously tunable nanolaser by utilizing single perovskite alloy nanowires.

Using 3D aerosol jet-printing, researchers 3D-printed perovskite layers on a graphene substrate. The results were stunning. The method produced X-ray detectors with a record sensitivity and a four-fold improvement on the best-in-class medical imaging devices.
These highly efficient perovskite X-ray detectors that can be easily integrated into standard microelectronics to considerably improve the performance of medical imaging devices. 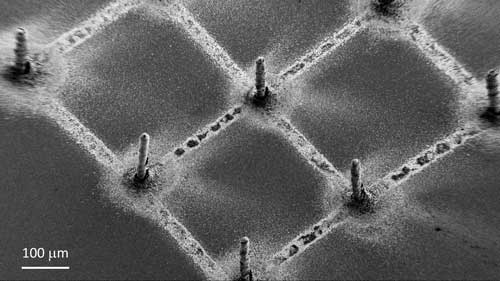 Example of the deposited perovskite pillars, defining a pixel for the creation of an image. (Image: L. Forró, EPFL)

Researchers developed novel effective nanoscale light sources based on halide perovskite. The perovskite nanoparticles serve both as emitters and nanoantennas and allow enhancing light emission inherently without additional devices.
Moreover, perovskite enables tuning emission spectra throughout a visible range by varying the composition of the material. This makes the new nanoparticles a promising platform for creating compact optoelectronic devices such as optical chips, light-emitting diodes, or sensors.

The three-dimensional (3D) geometry of 3D-printed nanopixels can increase the emission brightness of display pixels, varying with the height of the pixels, and can be used to fabricate super high-resolution devices. Researchers demonstrated 3D printing of perovskite nanopillars that can be used for creating nanoscale display pixels. 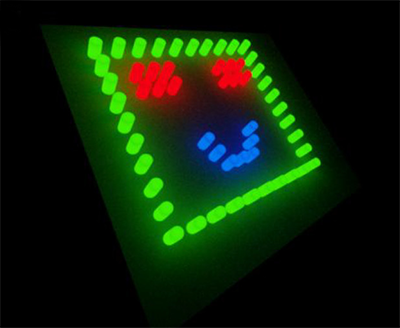