What is smart dust and how is it used?

Imagine a cloud of sensors, each the size of a grain of sand or even smaller, blown aloft by hurricane winds and relaying data on the storm to weather stations below. Picture an invisible sensor network embedded into a smart city’s roads to monitor traffic, road surface damage and identify available parking spaces – all in real time. Or billions of nanosensors distributed over forests and other areas with fire hazards to detect a fire at its very beginning. Or envision programmable smart dust that triggers an alarm signal when invisible microcracks are detected in a turbine blade.
Smart dust refers to wireless networks of sub-millimeter-scale autonomous computing and sensing platforms not larger than a grain of sand. Smart dust senses and records data about its environment such as light, temperature, sound, presence of toxins or vibrations, and transmits that data wirelessly to larger computer systems.
Smart dust is a vision of the networked future where intelligent networks of trillions of miniscule sensors continuously feel, taste, smell, see, and hear what is going on in their surrounding environment, communicate with each other and exchange information. Smart dust networks are the ultimate Internet-of-Things (IoT) devices.
Smart dust is revolutionary because the sensors are small enough to be put anywhere, even in narrow and difficult areas. Another huge advantage is that these devices work without any human intervention as they are pre-programmed and, notwithstanding their tiny size, have their own power supply.
This technology is expected to not only monitor building controls, pipelines, factory equipment and drug-making processes, but it will also lead to ubiquitous autonomous artificial intelligent computation near the end user, such as authentication, medical procedures and health care monitoring, sensing and tracking, industrial and supply chain monitoring, and defense applications.
Although smart dust devices are not quite in dust-size territory, researchers hope to shrink these devices to the size of a speck of dust via nanotechnology.
To be economically feasible, such single-use devices have to be cheap (we are talking pennies or even fractions of a penny), even cheaper than the radio-frequency identification tags currently used to track the inventory of warehouses, for example.

How does smart dust work and what does it do?

Smart dust networks contain nodes (called ‘mote’) that combine sensing, computing, wireless communication capabilities and autonomous power supply in a tiny package with a volume of few cubic millimeters or even less.
Smart dust is based on microelectromechanical systems, or MEMS. MEMS consist of any combination of mechanical (levers, springs, membranes, etc.) and electrical (resistors, capacitors, inductors, etc.) components to work as sensors or actuators. In the future, as fabrication technologies advance, this will shrink further down in size to NEMS – nanoelectromechanical systems.
Motes are constructed using conventional silicon microfabrication techniques and can remain suspended in an environment similar to dust (hence the name). 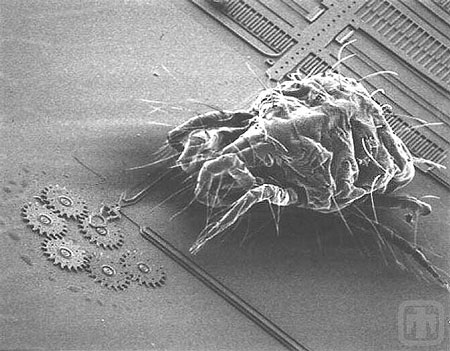 A mite, less than 1 mm in size, approaching a microscale gear chain. (Image: Sandia National Laboratories)
Each mote can be left unattended to collect environmental data such as light, temperature, pressure, vibrations, the existence of toxins, etc., and transmit this data wirelessly to larger, remote computer systems – or, depending on the mote's computing power, processes it directly at the point of data collection.
For instance, in an industrial setting, smart dust sensors relay signals back to a command computer, which then compiles the data to give feedback to plant managers. Or the results could trigger an automatic response, such as turning down a building's temperature or reducing the flow of water.
Another example is DARPA's SHIELD program that plans to use microscale chips to track and authenticate the supply chain of computer chips for defense applications. The goal is to eliminate counterfeit integrated circuits from the electronics supply chain by making counterfeiting too complex and time-consuming to be cost effective. SHIELD aims to combine NSA-level encryption, sensors, near-field power and communications into a tiny chip capable of being inserted into the packaging of an integrated circuit.

Origin of the smart dust concept

‘Smart Dust’ was first conceived in the 1990s by Dr. Kris Pister while a professor of electrical engineering at the University of California, Berkeley, as a simple way to deploy intelligent wireless sensors.
At the time, Pister imagined a world in which ubiquitous sensors could measure everything that could be measured. Immediately, he thought about environmental applications such as weather tracking (read his concept paper from 2000: Emerging challenges: Mobile networking for “Smart Dust”).
But it doesn’t come as a surprise that it was the military that gave the impetus, and financing, for developing smart dust. In 1992, DARPA funded Pister’s research in the Smart Dust project (you can read the original proposal here as PDF). 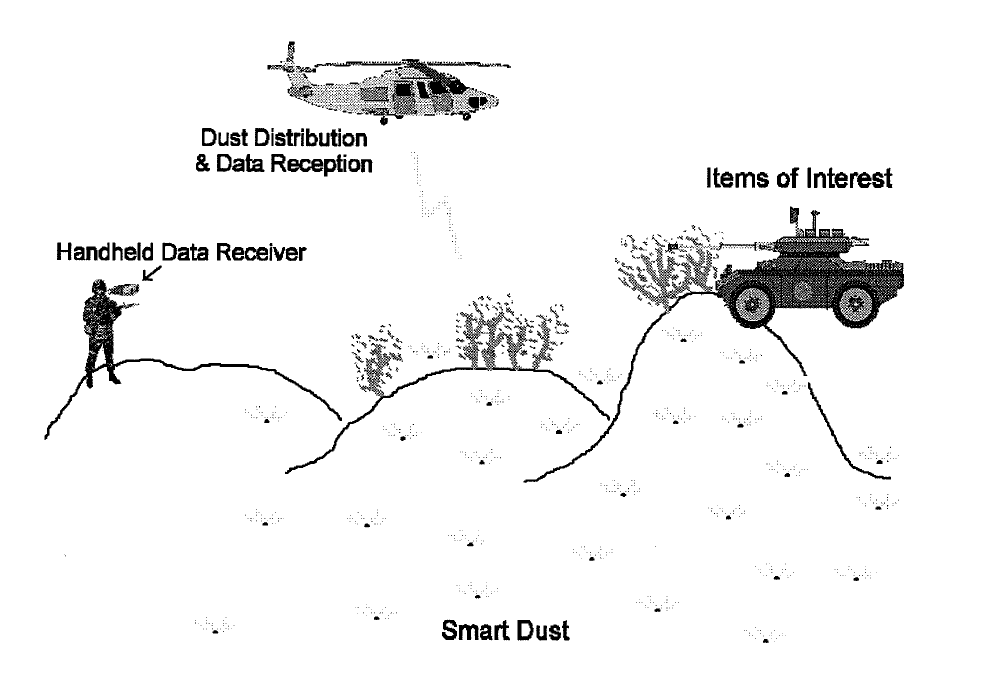 Schematic of a smart dust battlefield sensor network as depicted in the grant application for DARPA’s Smart Dust project: Thousands of sensor nodes covering square kilometers are delivered by autonomous helicopter. They track motion of vehicles for hours/days, and report information superimposed on live video when interrogated by hand-held receiver or helicopter-borne receiver.

Components of a smart dust mote

Very basically, every mote consists of four device classes: sensors, circuits, communication, and power supply. In a wireless sensor node this would conceptually look like this schematic:

Example for the system design of a wireless sensor node. It consists of a 3D-printed functional cube package which contains several inkjet-printed sensors and the antenna. The circuit board has also been 3D-printed and contains the microelectronics enclosed in the package. (Source: DOI 10.1002/admt.201700051)
The entire package contains one or more MEMS or NEMS sensors to perform the mote’s principal sensing purpose of detecting and measuring things like vibration, temperature, pressure, sound, light, magnetic field, etc. Circuits (microcontroller) to interface with the sensors and process and store data. Communication ideally comprises a transmitter and 3D antenna which ensures equal radiation in all directions, thus enabling orientation insensitive communication. Power supply for the entire mote, depending on the area of operation, could be a solar cell array or some form of thin-film battery or supercapacitor.
The whole package looks like this: 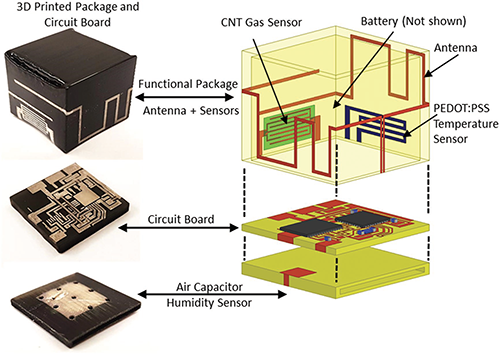 Read more about this 3D-printed, fully integrated wireless sensor device.
Although the cube dimensions in above example are 21 mm on each side, it illustrates the basic concept and component architecture of a smart dust mote. Inevitable miniaturization will ultimately lead to sub-micron scale for these devices.
Here are two more examples of how miniaturization leads to incredibly tiny components.
3D printed microscale lens systems 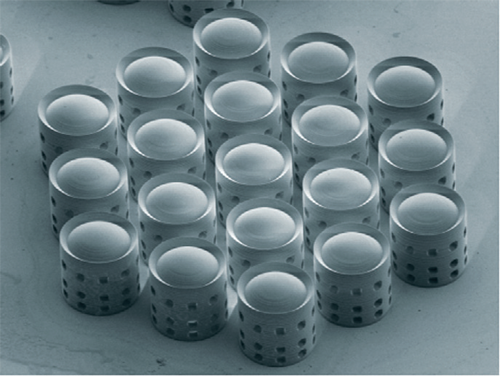 Scanning electron microscope image of the hexagonal lens arrangement. Each doublet lens system has a diameter of 120 µm and a height of 128 µm. Scale bar, 100 µm. (Source: DOI 10.1038/NPHOTON.2016.121)
Researchers have demonstrated fully working multi-lens objectives with sizes of around 100 microns, roughly the size of a grain of salt, that could lead to smart dust motes with autonomous vision. The lenses show unprecedented performances and high optical quality with resolutions of up to 500 line pairs per millimeter for imaging applications.
Dust-sized power supply
Ever smaller energy storage devices in the submillimeter range for even smaller microelectronic components are a major technical challenge. Nevertheless, researchers manage to continuously reduce their size, as this example of a nanosupercapacitor shows – it is the size of a speck of dust but packs the voltage of an AAA battery: 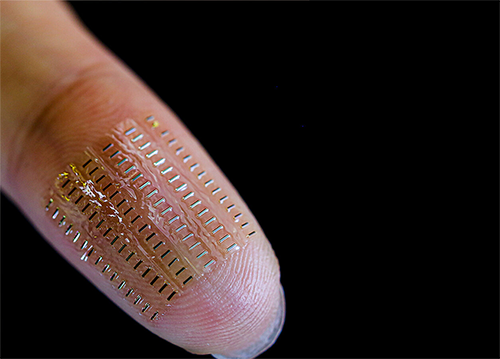 Each of the 90 tubular supercapacitors on the fingertip holds a volume of just 1 nanoliter (0.001 mm3) but delivers up to 1.6 V supply voltage.

Granted, this application is a bit further out, but actively worked on by researchers. And, again, the military is spearheading this through DARPA’s Electrical Prescriptions (ElectRx) program.
Researchers have developed a safe, millimeter-scale wireless device small enough to be implanted in individual nerves, capable of detecting electrical activity of nerves and muscles deep within the body, and that uses ultrasound for power coupling and communication. They call these devices neural dust.
Each neural dust sensor consists of only three main parts: a pair of electrodes to measure nerve signals, a custom transistor to amplify the signal, and a piezoelectric crystal that serves the dual purpose of converting the mechanical power of externally generated ultrasound waves into electrical power and communicating the recorded nerve activity.
And while not networked yet, researchers already demonstrated the feasibility of inserting computer chips into individual cells. But you can imagine where this could go… (dear conspiracy theorists: PLEASE don’t send us your comments!).

The main challenges researchers have been grappling with are the lack of enough power on the small footprint and the difficulties of integrating power systems into these highly scaled devices. Since the storage density of battery technologies has not followed Moore's law scaling trends, IoT systems need to rely on power conversion from outside sources such as thermal, vibrational, light, or radio waves.
As nanoelectronics and packaging technologies evolve, though, now may be the right time that we start to rethink the solutions for these problems and advance towards more powerful small computer systems than what was originally proposed.
The ability to integrate various nanoelectronic chiplets – such as processor, memory, and photovoltaics – in an industrial-scale wafer-level-packaging process, creating solar-powered smart dust, unlocks the potential of large-scale manufacturing of these compact integrated systems with high performance and ultralow cost.

The vast range of smart dust application makes it impossible to provide detailed descriptions in just a single article. So we just list some major areas below:

Wide-scale adoption of smart dust would bring with it a namber of risks:
Privacy. Many that have reservations about the real-world implications of smart dust are concerned about privacy issues. Smart dust devices will become so small that they are invisible to our naked eye and, therefore, are extremely difficult to detect. They can be programmed to record whatever their sensors are capable of (ironically, people have begun to voluntarily carry devices that would accomplish exactly that). You probably won’t know who is collecting the data and what they are doing with it. Your imagination can run wild regarding the negative privacy implications when smart dust falls into the wrong hands
Control. Once billions of smart dust devices are deployed over an area it would be difficult to retrieve or capture them if necessary. Given how small they are, it would be challenging to detect them if you weren’t made aware of their presence. The volume of smart dust that could be engaged by a rogue individual, company or government to do harm would make it challenging for the authorities to control if necessary.
Cost. As with any new technology, the cost to implement a smart dust system that includes the satellites and other elements required for full implementation is high. Until costs come down, it will be technology out of reach for many.
Pollution. Smart dust motes essentially are single-use devices. Unless they are fully biodegradable the question arises if they will pollute the areas where they are used (soil, air, water).
Health. As soon as smart dust particles shrink to the nanoscale, their risk profile will match that of nanoparticles in general and the potential health risk associated with inhaling or ingesting them.
Legal issues. The lack of security protecting information created by smart dust networks is creating not only privacy concerns, but the network can be accessed without authorization (i.e., hacked) by third parties and its information can be used for illegal purposes.

Check out our SmartWorlder section to read more about smart technologies.