One of the most fascinating aspects of nanotechnology is the incredibly small scale at which nanoengineering and nanofabrication take place. Consider this example: The first working transistor, built by Bell Labs John Bardeen, Walter Brattain, and William Shockley in 1947, measured roughly 1 centimeter across. Today, logic transistor density has surpassed a staggering 100 million transistors per square millimeter. That means that the same surface area of Bell Labs' original transistor can now contain more than 10 billion transistors!
Chemists and biologists have dealt with naturally occurring nanoparticles all along. Think molecules or viruses. Toxicologists have dealt with nanoparticles that are the result of modern human life such as carbon particles in combustion engine exhaust. Without being aware of it, tire manufacturers used nanoparticles (carbon black) to improve the performance of tires as early as the 1920s. Medieval artists used (unknowingly) gold nanoparticles to achieve the bright red colors in church windows. You might even say that we are surrounded by, and made of, nanomaterials – atoms and molecules are nanoscale objects after all. So why all the fuzz about nano now?
The ongoing quest for miniaturization has resulted in tools like the atomic force microscope and the scanning tunneling microscope. Combined with refined processes such as electron beam lithography, these instruments allow researchers to deliberately manipulate and manufacture nanostructures; something they couldnt do before.
Engineered nanomaterials, either by way of a top-down approach (a bulk material is reduced in size to nanoscale patterns) or a bottom-up approach (larger structures are built or grown atom by atom or molecule by molecule), go beyond just a further step in miniaturization. They have broken a size barrier below which quantization of energy for the electrons in solids becomes relevant.
The so-called quantum size effect describes the physics of electron properties in solids with great reductions in particle size. This effect does not come into play by going from macro to micro dimensions. However, it becomes dominant when the lower nanometer size range is reached. Materials reduced to the nanoscale can suddenly show very different properties compared to what they show on a macroscale. For instance, opaque substances become transparent (copper); inert materials become catalysts (platinum); stable materials turn combustible (aluminum); solids turn into liquids at room temperature (gold); insulators become conductors (silicon).
A second important aspect of the nanoscale is that the smaller a nanoparticle gets, the larger its relative surface area becomes. Its electronic structure changes dramatically. Both effects lead to greatly improved catalytic activity but can also lead to aggressive chemical reactivity.
The fascinating prospects that nanotechnology offers engineers and researchers stems from these unique quantum and surface phenomena that matter exhibits at the nanoscale, making possible novel materials and revolutionary applications.
It is quite amazing how much of nanotechnology-related research is inspired by nature's designs. As a matter of fact, nature is full of examples of sophisticated nanoscopic architectural feats. Whether it is structural colors; adhesion; porous strength; or bacterial navigation and locomotionthey underpin the essential functions of a variety of life forms, from bacteria to berries, wasps to whales.

Examples of nanotechnology products and applications 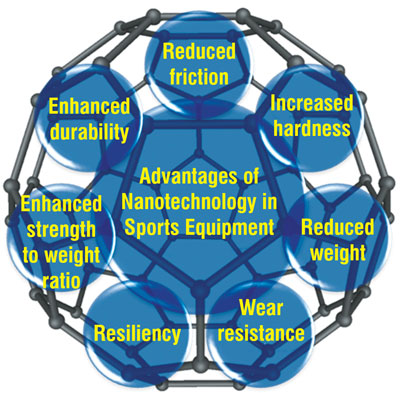 Nanotechnology advantages in sports equipment. (Image: Wikimedia Commons)
We have also compiled a Nanotechnology FAQ – Frequently Asked Questions list for you to explore.