Your guide to metric prefixes and conversion from yocto to yotta

What are Metric Prefixes?

A metric prefix is a numerical multiplier that is placed before a basic unit of measure to indicate a specified multiple or fraction of that unit. The 20 recognized metric prefixes have been specified by the International Bureau of Weights and Measures (BIPM) for the International System of Units (SI), and are used to make describing quantities more concise.
These prefixes range from the smallest, "yocto" (1 quadrillionth), to the largest, "yotta" (1 quadrillion), and provide a standardized way to express quantities in a way that is easily understood and comparable.
These prefixes are utilized with various metric units of measurement, including but not limited to mass, volume, weight, length, time, temperature, angle, and energy. They provide a convenient way to express quantities in a standardized manner, allowing for easier comparison and communication between individuals.
In addition to their use within the metric SI system, metric prefixes are also commonly used outside of it in many different fields. For example, the prefix "giga" is used in the term "gigabyte" in computing, "mega" in "megaparsec" in astrophysics, and "mega" in "megaelectronvolt" in particle physics. 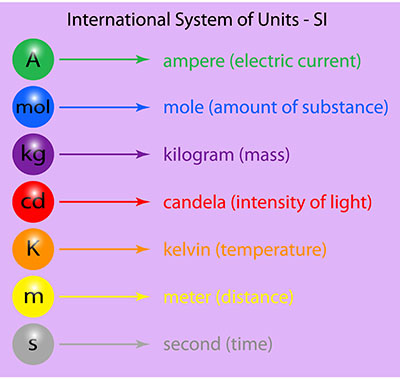 Conversions between metric system units are easy because the system is based on powers of ten. For example, there are 100 centimeters in 1 meter, 1000 meters in 1 kilometer. Conversely, there are 1 billion nanometers in 1 meter. Metric prefixes are used to distinguish between units of different size. These prefixes all derive from either Latin or Greek terms.
The table below lists the most common metric prefixes and their relationship to the central unit that has no prefix. Length is used as an example to demonstrate the relative size of each prefixed unit. 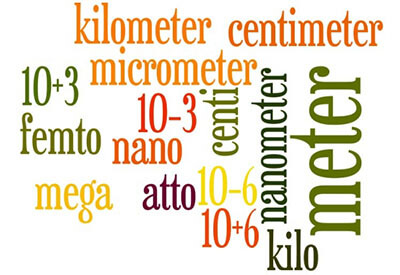 The estimated total annual amount of digital data created, consumed, and stored globally is about 64 zettabytes in 2020, expected to rise to 180 zettabytes by 2025.

A distance of one terameter is roughly one light hour. The diamter of Earth's orbit around the Sun is about 0.3 terameters
Terahertz radiation consists of electromagnetic waves within the ITU-designated band of frequencies from 0.3 to 3 terahertz (THz).
The hard disk capacity of modern computers has reached the terabyte range.

The clock speeds of CPUs in modern computers has reach the gigahertz (GHz) range.

The head of a pin is about 2 millimeters in diameter. The smallest distances the human eye can resolve is around 0.02 to 0.04 mm. Red ants are about 5 mm long.

A strand of human DNA is 2.5 nanometers in diameter. A single gold atom is about a third of a nanometer in diameter

The diameter of a proton is 1.6 femtometers. Molecules react within femtoseconds. The light pulses produced with the most modern lasers last just a few femtoseconds to attoseconds

Attosecond physics deals with ultrafast processes in nature. For instance, the motion of electrons in atoms lasts just a few attoseconds.

The Scale of Things – Nanometers and More

Take a look of examples across a range from centimeter to nanometer: 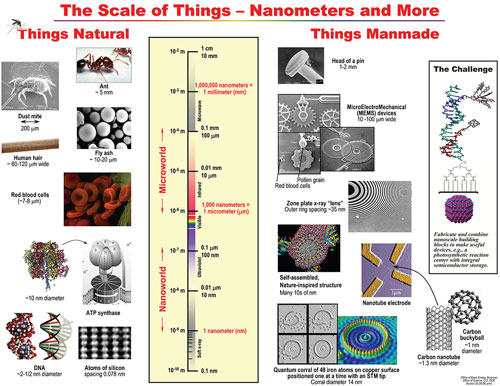 The Scale of Things - Nanometers and More. (Source: Office of Science, U.S. Department of Energy) (click on image to enlarge)

Secret Worlds: The Universe Within


View the Milky Way at 10 million light years from the Earth. Then move through space towards the Earth in successive orders of magnitude until you reach a tall oak tree. After that, begin to move from the actual size of a leaf into a microscopic world that reveals leaf cell walls, the cell nucleus, chromatin, DNA and finally, into the subatomic universe of electrons and protons.

(Secret Worlds: The Universe Within. © Michael W. Davidson and The Florida State University)

Once the tutorial has completely downloaded, a set of the arrows will appear that allow the user to increase or decrease the view magnitude in Manual mode. Click on the Auto button to return to the Automatic mode.

Notice how each picture is actually an image of something that is 10 times bigger or smaller than the one preceding or following it. The number that appears on the lower right just below each image is the size of the object in the picture. On the lower left is the same number written in powers of ten, or exponential notation. Exponential notation is a convenient way for scientists to write very large or very small numbers.