Electronegativity is a key property of all the elements in the periodic table. It is a measure of an atom's ability to attract electrons to itself within a chemical bond. It is a relative scale based on Pauling's electronegativity scale, which ranges from 0.7 (for cesium) to 4.0 (for fluorine). The higher an element's electronegativity, the more strongly it attracts electrons towards itself, resulting in a partial negative charge.
In a chemical bond, the more electronegative atom gains extra electrons, becoming negatively charged, while the less electronegative one loses electrons and becomes positively charged.
The difference in electronegativity between two bonded atoms determines the polarity of the bond, with a large difference indicating a polar covalent bond (e.g. H-F bond) and a small difference indicating a non-polar covalent bond (e.g. C-C bond).
Electronegativity is an important theoretical concept in chemistry and useful in rationalizing stability, structure and properties of molecules and solids. Ever since Linus Pauling, an American chemist introduced the concept of electronegativity in the 1932 as ‘the power of an atom in a molecule to attract electrons to itself’, it has shaped much of the thinking in the fields of structural chemistry and solid-state chemistry and physics.
Pauling suggested that the bond energies of heterogeneous polar covalent bonds is expressed by the geometric mean of the homogeneous bond energies of the constituent atoms. This has been true for ensemble systems such as gaseous phase but has not been obvious for atomic-scale systems with a small number of atoms.
Electronegativity is a fundamental notion, essential for explaining things that range from the energy of chemical bonds to the (in)stability of chemical compounds. It is expected to correlate with many physical properties of materials - from mechanical (such as hardness) to electronic, optical (such as color).
Chemists have come up with various definitions and scales of electronegativity. Yet Pauling's scale is the first and the most common one, present in every chemistry textbook.
Watch an informative video on electronegativity, atomic structure and properties.

Electronegativity is defined as the tendency of an atom to attract electron density, i.e., to polarize the chemical bond.
There are many definitions of electronegativity, which can be roughly classified as either spectroscopic (these are defined for isolated atoms) or thermo-chemical (characterizing bond energies and heats of formation of compounds). The most widely used is the thermo-chemical Pauling’s scale, where electronegativities have units of eV1/2.
Electronegativity is a derived quantity, so it is not directly measurable. It is relative to hydrogen which was assigned a value of 2.20 on the Pauling scale. 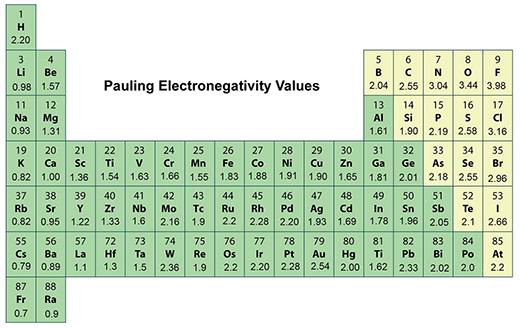 In an oxygen (O2) molecule, both atoms have the same electronegativity. The electrons in the covalent bond are shared equally between the two oxygen atoms.
The chlorine atom has a higher electronegativity than the hydrogen atom, so the bonding electrons will be closer to the Cl than to the H in the HCl molecule.

How to determine electronegativity

Pauling deduced his electronegativity values from thermo-chemistry using the energies of some chemical bonds. He proposed the simplest formula to calculate a bond's stabilization due to the difference in electronegativity between the atoms. It later transpired that the predictions made with Pauling's scale had a rather low accuracy. 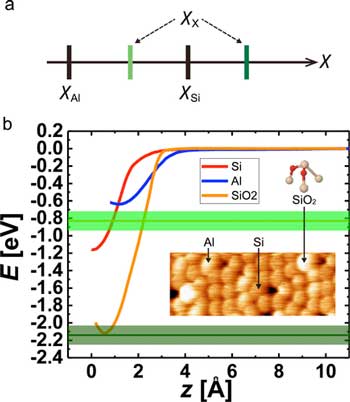 Electronegativity determination of surface atoms solely by experiments (Source). (a) Magnitude relationships of electronegativities for Si,Al, and unknown X atoms. (b) Short-range E(z) curves obtained on Si (red), Al (blue) adatoms, and SiO2 (orange), respectively. The expected values of bond energy on SiO2 acquired by the Al tip are represented by light and dark green lines with their error bands. The inset shows a typical topographic AFM image of Si, Al adatoms, and SiO2 on the Si(111)-(7x7) surface. The ball-and-stick model of SiO2 represents Si in cream and O in red. (Reprinted with permission by American Chemical Society)
More recently, scientists modified Pauling's formula and redefined the electronegativities of elements. This has led to the creation of a new scale of electronegativity (published in Nature Communications: Thermo-chemical electronegativities of the elements).
"It all started when we decided to calculate Pauling's electronegativities under pressure,” explains Prof Artem R. Organov, corresponding author of the paper. “The chemistry of high pressures is quite exotic. Still, you will likely be able to understand a lot of things once you find out how the electronegativities of elements change under pressure. We used Pauling's definition to calculate electronegativity under normal conditions. We were amazed to discover that his scale did not match either theoretical or experimental bond energies for significantly ionic molecules.”
He continues: “Moreover, many publications in chemical literature mention this inconsistency, but none offer a consistent solution. I realized that the root cause was that Pauling treated the molecule's ionic stabilization as an additive effect. If we consider it a multiplicative effect, many drawbacks will be removed.”
With the new formula and experimental energies of chemical bonds, the scientists determined the electronegativities of all elements. They obtained a beautiful scale that works both for small and large differences in electronegativity.
The new scale uses electronegativity as a dimensionless quantity, which is very practical and accurately reproduces both molecules' energies and chemical reactions. 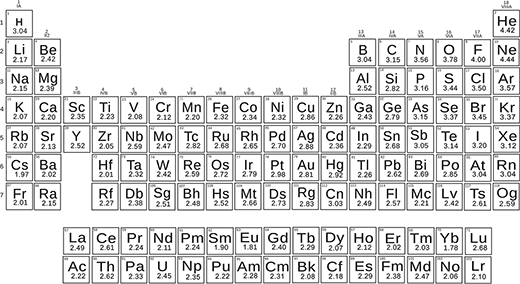 Most and least electronegative elements