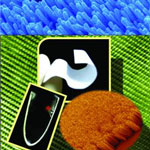 Zinc oxide is considered a workhorse of technological development exhibiting excellent electrical, optical, and chemical properties with a broad range of applications as semiconductors, in optical devices, piezoelectric devices, surface acoustic wave devices, sensors, transparent electrodes, solar cells, antibacterial activity etc. Thin films or nanoscale coating of ZnO nanoparticles are viewed with great interest for their many potential applications as substrates for functional coatings. Researchers in Taiwan have now shown, for the first time, that they can directly grow vertically aligned, highly crystalline and defect-free single-crystalline zinc oxide nanorods and nanoneedles on paper. 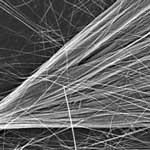 Traditionally, battery materials have been studied with bulk quantities in a complex environment with both active electrode components and many other supporting materials such as polymer binders and conductive additives. Although nanomaterials have been found to be able to improve battery performance, the complexity has made it hard to tell clearly about their advantages. Moreover, it is difficult to know whether fast capacity fading is due to the intrinsic nature of the transport property changes of active nanomaterials or an extrinsic reason from their interactions with the supporting materials, if all of them are studied together. The goal to understand the intrinsic reason of active material capacity fading has motivated a group of researchers to design single nanowire electrochemical devices as an extremely simplified model system to push the fundamental limits of the nanowire materials for energy storage applications. The result is a powerful and effective diagnostic tool for property degradation of lithium ion based energy storage devices. 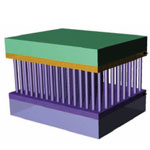 Imagine cellular phones that can be charged during conversations and sound-insulating walls near highways that generate electricity from the sound of passing vehicles. A number of approaches for self-powering systems by scavenging energy from environments using photovoltaic, thermoelectric, and piezoelectric phenomena have been intensively explored. Among them, very recent innovative research has been intensively carried out to convert external mechanical stimuli such as body movements, heartbeat, blood flow, and ultrasonic wave into electricity, resulting in piezoelectric power-driven wireless self-powered systems. Such a piezoelectric power generation aims to capture the normally wasted energy surrounding a system and converts it into usable energy for operating electrical devices. New work by a nanotechnology research team in Korea has now demonstrated that it is possible to use sound as a power source to drive nanogenerators based on piezoelectric nanowires.

The supersensitive detection of explosives by nanowire nano-nose arrays 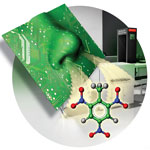 Semiconducting nanowires are known to be extremely sensitive to chemical species adsorbed on their surfaces. For a nanowire device, the binding of a charged analyte to the surface of the nanowire leads to a conductance change, or a change in current flowing through these tinny wires. Their one-dimensional nanoscale morphology and their extremely high surface-to-volume ratio make this conductance change to be much greater for nanowire-based sensors versus planar field-effect transistors, increasing the sensitivity to a point that single molecule detection is possible. In the last decade, it has been demonstrated that these new nanostructures can be used for the detection of multiple biomolecular species of medical diagnostic relevance, such as DNA and proteins. In recent work, researchers have used the ultrasensitive recognition properties of semiconducting silicon nanowires to demonstrate the most sensitive ever published sensing of explosives reported so far. 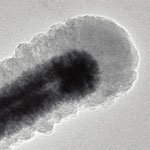 Most of today's lithium-ion batteries rely on anodes made from graphite, a form of carbon. There are several candidate electrodes to replace graphite as the anode for lithium-ion batteries. Such electrodes like silicon or tin have very high capacities but suffer from poor efficiency and cyclic stability as they experience large volume change and particle pulverization during repeated cycling. Silicon-based anodes, for instance, theoretically offer as much as a ten-fold capacity improvement over graphite, but silicon-based anodes have so far not been stable enough for practical use. Researchers have now used the macromolecular structure of self-assembled Tobacco mosaic virus as templates to fabricate stable three-dimensional current collectors for high power and high energy density Li-ion batteries. 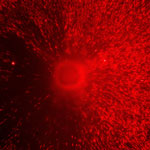 Nanotechnology-enabled tissue engineering is a rapidly growing field. At the core of tissue engineering is the construction of scaffolds out of biomaterials to provide mechanical support and guide cell growth into new tissues or organs. In particular, electrospun biodegradable polymeric nanofibers are being used in scaffolds for engineering various tissues such as nerves, cartilages or bone. Electrospinning is a fabrication technique which can produce nanoscale fibers from more than 100 different polymers. The electrospun nanofibers are typically collected as nonwoven mats with random orientation. A new study has now demonstrated the fabrication of a novel class of nanofiber scaffold composed of radially-aligned, electrospun nanofibers and also demonstrated the unique application of these materials as effective biomedical patches/scaffolds that could prove to be beneficial during neurosurgery.

The future of nanoelectronics - transistors without junctions 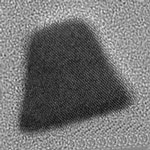 All existing transistors are based on junctions - obtained by changing the polarity of silicon from positive to negative. Researchers have now demonstrated a new type of transistor in which there are no junctions and no doping concentration gradients. The key to fabricating a junctionless gated resistor is the formation of a semiconductor layer that is thin and narrow enough to allow for full depletion of carriers when the device is turned off - something that was achieved by fabricating silicon nanowires with a diameter of a few dozens of atomic planes. The electrical current flows in this silicon nanowire, and the flow of current is perfectly controlled by a ring structure that electrically squeezes the silicon wire in the same way that you might stop the flow of water in a hose by squeezing it. 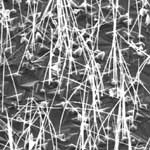 One of the outstanding challenges in nanotechnology generally, and in the exploitation of so-called 'bottom-up' assembly of basic nanoscale building blocks such as nanowires, is the development of techniques for assembling large numbers of such nanostructures into more complex systems and precisely specified patterns in an accurate, deterministic manner. For instance, it is possible to build transistors, optical devices, and sensors with very specific properties using nanowires. Thus many useful applications of nanowires will depend on the ability to take these building blocks and organize them in some deterministic way in order to ultimately construct and interface with a nanowire-based system. New work demonstrates the basic capability for, and elucidates some of the guiding principles in, the use of dielectrophoretic behavior to direct the placement of large numbers of nanowires on complex, pre-patterned structures as might be required for integration of nanowires with, for example, silicon-based microelectronic circuitry. It shows that a high level of placement precision can be achieved by paying careful attention to the signal frequency as well as the macroscopic electrode architecture that is employed.